Petrol or Diesel - which will be your next car?

Regarded as one of the major source of air pollution, vehicles are congesting the roads with traffic and the air with their exhausts daily. A study by TERI and ARAI found that vehicular emissions may contribute as much as 30% of the total air pollution in some cities. With countless vehicles being bought in india every year, facing the choice of petrol car vs. diesel car is inevitable.

Pick petrol or electric car instead of diesel.

We strongly recommend you pick petrol or electric car as your next car over diesel and in this article we provide some concrete reasons why. 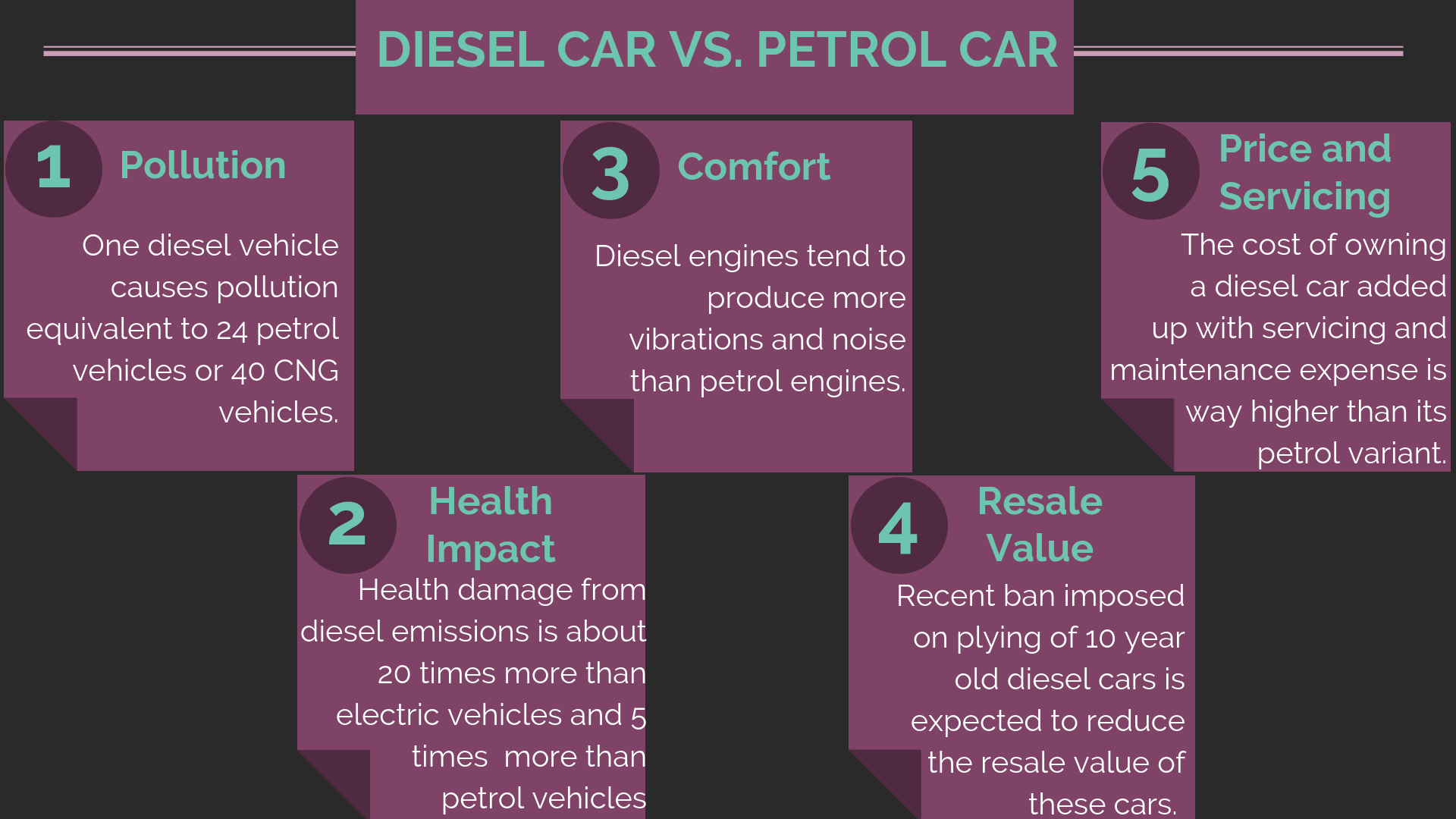 Diesel fuelled engines produce more CO2 per gallon of fuel combustion with additional release of harmful emissions such as NOx and PM. 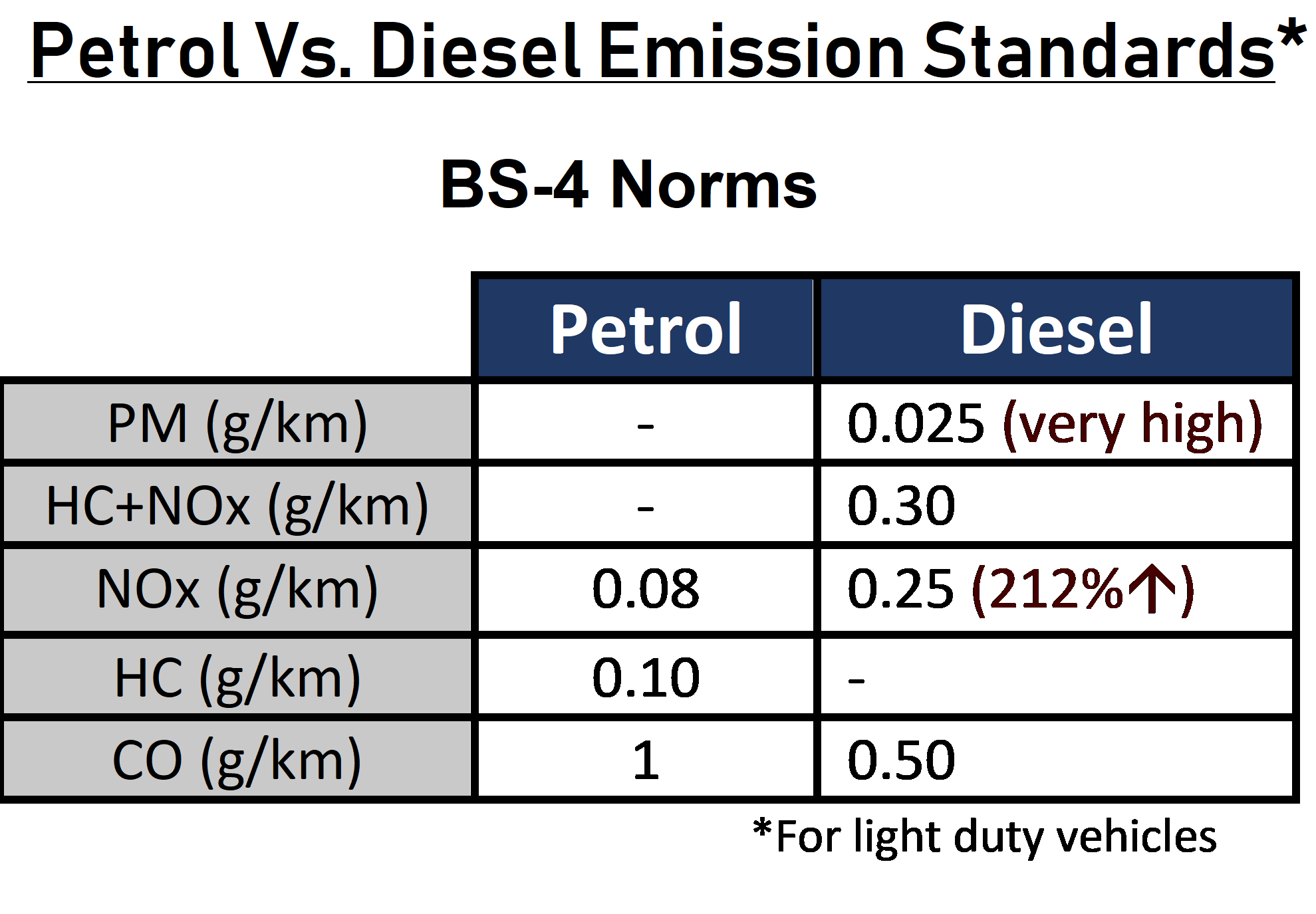 One diesel vehicle causes pollution equivalent to 24 petrol vehicles or 40 CNG vehicles. Diesel being the dirtier fuel, has more emissions as is depicted by the emission standards currently followed by BS-4 compliant cars. But thats not all, lab tests show emissions from on-road diesel cars far exceed the present standards even in the most recent models with advanced systems. 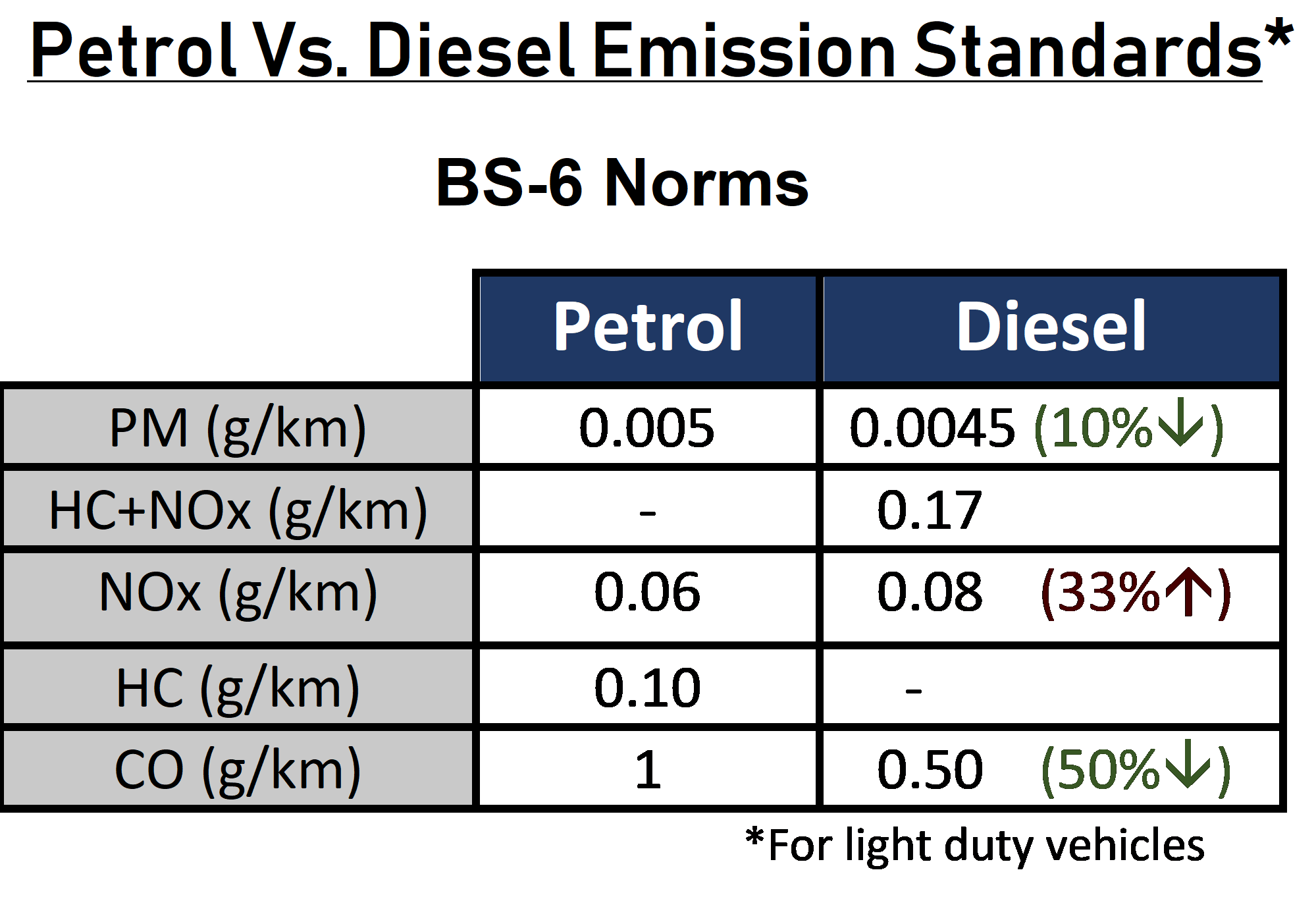 BS-6 compliant cars which are expected to be on the market in India by 2020 and the equivalent Euro 6 imported cars already on the road, are definitely cleaner than BS-4 diesel cars on the road today. However diesel cars are known to be failing to limit their exhausts to the legal limit. Recall the Volkswagen dieselgate scandal a few years back, where Volkswagen Group failed to reach the Euro 6 emission standards and was found to be cheating the emission test. In-fact almost all car manufacturers claiming to adhere to euro 6 laws were producing diesels cars that emitted far more in real-world driving conditions than in official lab-based tests. According to a recent study by The Real Urban Emissions Initiative (TRUE) all new Euro 6 Diesel Cars Are Still Highly Polluting.

Based off the Euro 6 standards, the Indian BS-6 standards will be hard to achieve by Indian car manufactures and they will have to make more advanced upgrades which should affect affordability even more. In addition, it remains to be seen how effective Indian on-road tests will be to ensure that BS-6 diesel vehicles are actually meeting the new emission requirements. Read more about impacts of BS-6 vs BS-4 norms here.

With the established fact that diesel exhausts harm the environment more than petrol does, countries like China and Japan are moving towards banning diesel vehicles and most nations want to move to electric cars by 2030-2040.

Health impact on you and your family

It is important to consider the health impact to you and your family when you sit in, or stand near a diesel car. Researchers have found that the health damage from diesel vehicle emissions is about 20 times greater than from electric vehicles and five times more than petrol vehicles.

Need more reasons to steer away from Diesel cars?

One of the biggest appeal for having diesel engine is considered to be the low price of diesel fuel in contrast with petrol fuel labelling it more economic choice. But this price gap, which was Rs. 20.61 in 2012 has come down to Rs. 5 in 2018. Looking at the trends, this advantage of diesel vehicle may soon become diminished.

While efforts by the government are being implemented on a larger scale, each of us can make choices which helps reduce air pollution. So if you are buying your next car or even your first, pick electric or petrol vehicles over diesel and make the more healthy and environmentally friendly choice.