Pollution due to cooking, a rising concern for urban households

When we think of air pollution, an image of hazy smog over the city or black smoke spewing out of vehicles comes to mind. Often, we do not consider indoor air pollution that we may all be creating every day, in our houses, while cooking dinner in our kitchens. Or how sometimes it can be much worse than outdoor pollution, because the pollutants tend to build up and persist in indoor closed spaces.

India State-Level Disease Burden Initiative published a comprehensive estimate of deaths in india which states that out of 12.4 lakh deaths due to air pollution in 2017, 4.8 lakh deaths were attributed to household air pollution. The health risks are especially serious in rural areas where people are routinely being exposed to household air pollutants at levels that are lethal due to poor ventilation and use of cooking fuels like firewood and cow dung which emit substantial amounts of toxic pollutants.
According to a World Health Organisation report, smoke from such fuels inhaled by women is equivalent to smoking 400 cigarettes in an hour and causes severe respitory and other diseases.

Out of there 3.8 million deaths,

Aware of the health risks of using biomass for cooking, the government has been trying to incentivise the use of cleaner fuels like LPG with the implementation of subsidy schemes such as Deepam scheme (Andhra Pradesh /Telangana), and more recent national level schemes such as Rajiv Gandhi LPG scheme and Pradhan Mantri Ujjwala Yojana. Since its launch in May 2016, under the “Ujjwala Scheme” 3.3 crore new LPG connections have been issued. It has been a successful programme with impressive growth in the number of LPG connections. Unfortunately consumption numbers haven't seen the same growth as beneficiaries in rural areas are resorting back to dirtier fuels and not refilling cylinders due to high cost of even the subsidised cylinder at ~ Rs. 450.

That said, since 2007, the contribution of household air pollution to ambient air pollution has fallen in the range of 40%-50%, as 80 percent households have switched from traditional, solid fuel-burning chulas to cleaner, more efficient cooking fuels such as LPG and electricity.

Now it may seem like this problem is confined to rural areas, however it is essential to note that indoor pollution due to cooking can be harmful in urban areas with cleaner LPG cooking fuel as well.

So what is making cooking in urban homes a source of indoor pollution?

Cooking is an act of controlled combustion and the gas stoves we use indoors inevitably emit harmful gases. While you are cooking a healthy meal in your kitchen, you might be exposing yourself and your family to unsafe levels of particulate matter, nitrogen dioxide, carbon monoxide, and chlorofluorocarbons. 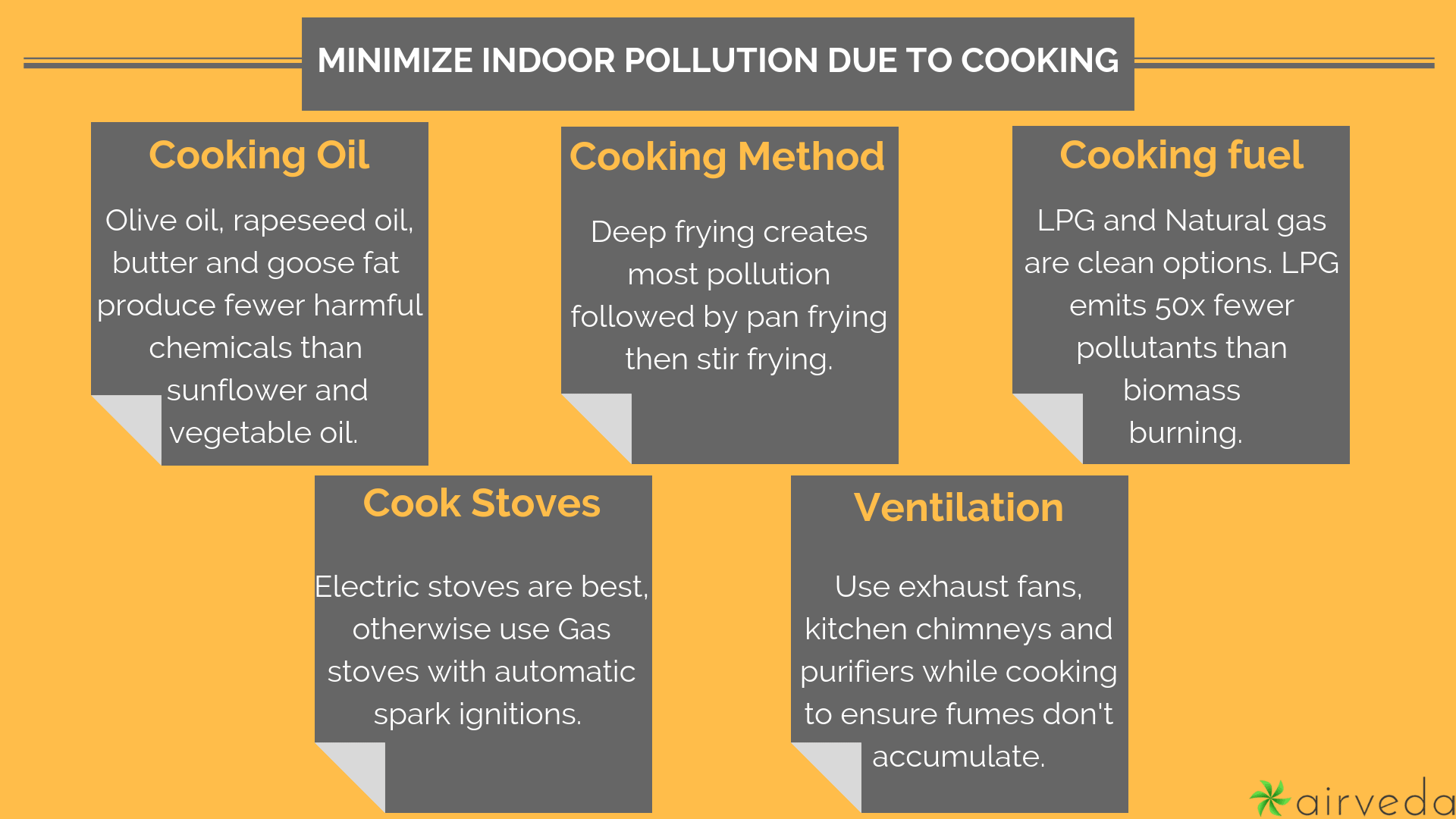 Multiple factors effect the amount and toxicity of air pollutants released while cooking.

While the above points help you reduce the toxicity of the fumes generated during cooking, there is no substitute to good ventilation while cooking. Please make sure to turn on your exhaust fan and kitchen chimneys when cooking to ensure that fumes from cooking don't accumulate in the house and lead to health issues for your family. Air purifiers can also be effective at reducing NO2 concentrations due to cooking by 27%.

We hope this article will help you minimize indoor air pollution due to cooking. Please leave your thoughts and questions in the comments below.