Will electric vehicles (EVs) pave the way to clean air?

2019 is coming along as a year in which India is making a big push for electric vehicles, indicating a pivotal point in its clean energy policy. The expectation is that adopting electric vehicles is likely to improve overall air quality and reduce net carbon emissions, thereby improving public health.

Will the move to electric vehicles really clean the air?

One of the major achievements of electric vehicles is that it moves the air pollution from the roads in urban areas where large population is getting affected to the industrial areas where power plants are running, which are usually on the outskirts of the cities. So this is similar to shutting down the coal based Badarpur thermal power plant in the middle of the city and ensuring that such plants are set up away from urban high population areas, thereby reducing direct exposure to individuals.

Electric cars provide quiet, smooth operation along with stronger acceleration and lower maintenance. But more importantly, they are more energy efficient. They convert 59-62% of electrical energy at grid to power at the wheels. Conventional gasoline cars in comparison, convert only 17-21% of energy stored in gasoline to power at the wheels. 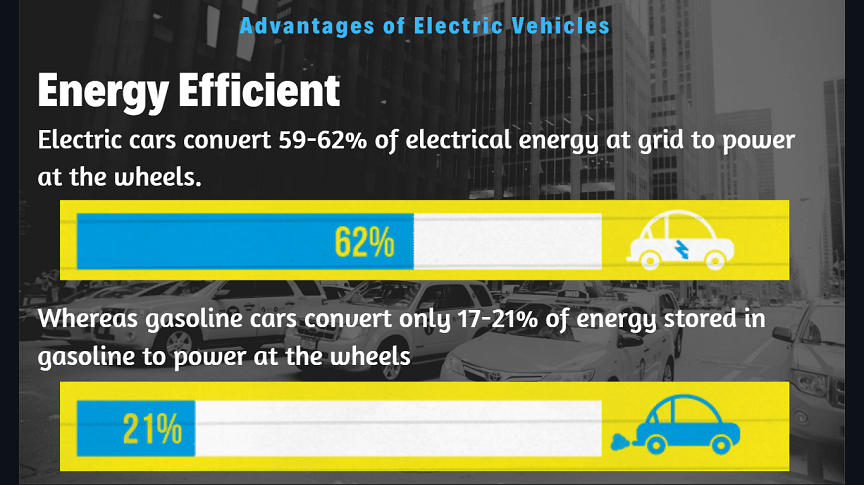 That said, the fundamental question that continues to linger is whether a significant shift to EVs will resolve the air pollution crisis in the country given that highly polluting coal-fired thermal power plants continue to be a significant part of the national energy mix. Moving to renewable resources has to be a top priority for the country if we plan to achieve our goals of reducing air pollution by moving to EVs.

At the end of the day, however, the real key to addressing the challenges of air pollution due to transportation is not private vehicles but a sustainable, clean, safe, efficient and comfortable public transportation system. Public transport in terms of electric metro trains, buses, taxis and last mile auto rickshaws can really help cut carbon emissions and help commuters breathe easier.

Apart from air pollution, there is also the concern of increased electronic waste, or e-waste, from the EV sector. When it comes to EVs, Li-ion batteries are now considered to be the industry standard. 759,600 EV units were sold in FY 2019, as per data from the Society of Manufacturers of Electric Vehicles. The Indian electric car market is expected to grow almost 10-fold between the period 2017 to 2025, from $71.1 million (Rs 486.2 crore) to $707.4 million (Rs 4,838.3 crore). This growth will be accompanied by a 10-fold increase in the country’s stockpiles of spent batteries over the following decade. Globally, market analysts expect that there will be 3.4 million such packs by 2025.

Despite strong laws, economies in transition like India are yet to develop robust recycling and/or buy-back systems that assure 100% formal recycling. As a result, a significant portion of discarded lead-acid batteries end up in backyard smelters across India, where crude and highly polluting techniques are applied to extract the metal.

What is the Indian Govt doing and will it succeed?

The Government is lately showing very clear intentions of promoting EVs. In 2017, Transport Minister Nitin Gadkari took the Indian automobile industry and the world by surprise when he announced that he intended for India to move to 100% electric cars by 2030, a magniloquent target given that even developed countries like the UK and France were hoping to phase out conventional combustion-engine cars only by 2040.

Earlier in July this year, Finance Minister Nirmala Sitharaman highlighted in her budget speech that India aims to become a "global hub of manufacturing of electric vehicles". Sitharaman also announced income tax exemptions for prospective buyers of electric vehicles and a reduced GST on them, from 12% to 5%, aiming to increase EV ownership across consumer classes. The EV industry now looks forward to a corresponding reduction of the 18% GST in the spare batteries as this will help maintain the low running cost of EVs over their lifetime.

The BJP-led government eventually diluted their plans for electric passenger cars from 100% down to 30% considering a pushback by the industry and the fear of job losses. Under the revised proposal, the government later decided to have only electric three-wheelers (largely auto-rickshaws) operating in the country by 2023, and only electric two-wheelers by 2025.

However, there are many encouraging signs in India too. For one, charging stations are being built at government offices, malls and even within public neighborhoods. Government-owned power companies like Bharat Heavy Electricals and Energy Efficiency Services plan to begin rolling out charging stations in the coming future, with the latter alone looking at 10,000 stations over the next two years. Second, electric vehicle models such as Hyundai’s Kona and Nissan’s Leaf model, are proliferating the Indian market and leading Indian car makers Mahindra & Mahindra and Tata Motors both sell electric cars. More importantly, the government plans to offer incentives to auto makers for manufacturing electric vehicles and batteries to spur economic growth and encourage manufacturing as part of its ‘Make in India’ initiative.

Additionally Delhi government plans to embark on a clean, shared and people-centric mobility solution, and has initiated action to procure 1,000 fully electric buses. The draft EV policy by the Delhi government aims to implement electric mobility solutions in Delhi and make 50% of the public transport bus fleet zero-emission by 2023, thereby ensuring Delhi becomes the electric vehicle capital of India.

The market share of electric vehicles stands around 39% in Norway, 2% in China and a meagre 0.06% in India. As of May 2019, India had about 0.28 million e-vehicles, way below a target of 15-16 million that the government is eyeing by 2020. China is the world's largest electric vehicle market, and has the world's largest network of charging stations. The governing authorities there pushed sales by placing caps on the number of conventional combustion vehicles that can be sold in most of its highly polluted cities. Further, car manufacturers there ensure that a specified share of their production is of so-called zero emission vehicles. Maybe we can learn a few lessons from our neighbour and implement them in this direction in addition to supporting infrastructure and lower taxes on EVs?

Do you think Electric Vehicles are the future? Will your next car be an EV? Do you think India will be able to achieve its EV goals? Please write in the comments below. We would love to hear from you.